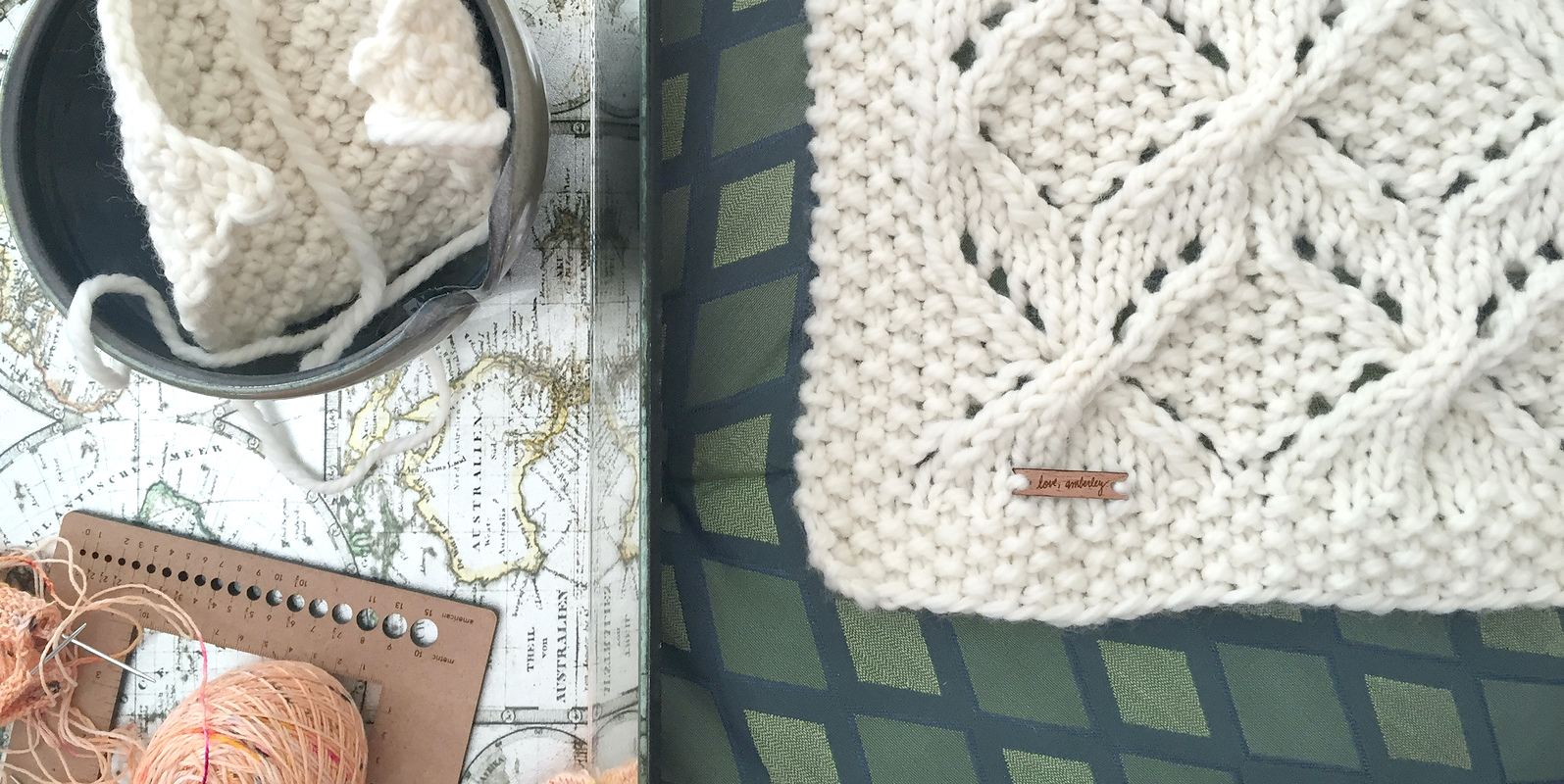 How Do New Emoji Happen?

I co-authored the emoji proposal that brought 🧶, 🧷, 🧵, (and finally this year, ”sewing needle”) into the world (er, Unicode standard). I’ve had occasion to tell the tale several times recently, and it always really interests people. So I thought I’d finally write it down!

Note: My co-author Amanda Hickman and I had the opportunity to chat about emoji and language-making on an episode of The Frontside Podcast in late 2018, if you’d like to listen.

I have been knitting since around the winter of 2013. Knitting became a creative outlet and meditative practice for me during a particularly bleak DC winter — my regular depression joined forces with seasonal depression and I barely existed for several months. Commute on the metro in the morning (in the dark), work from my office during the daylight, commute home in the afternoon (in the dark), become one with the couch, along with my best friend, sitting in silence, watching reality tv until we both wander to our rooms to sleep. Ad nauseam. Knitting extremely simple patterns gave me something warm, comforting, and low-effort to do, in the midst of those grayscale months.

A few years later, a co-worker of mine at the time (and now dear friend), introduced a social element to it. She would go to our local little yarn shop (LYS), where people would gather to work on projects (or “works in progress”, “WIPs”) and chat — a “stitch and bitch” group.

I came to love that little community (and miss it dearly!) A joke/complaint that came up semi-regularly in our communication with each other — “Where is the yarn emoji?!” We would jokingly use 🍝 and move on.

In October 2016, the Yarn package manager was released. All of a sudden it was like the tech world (jokingly and not) found out there was no yarn emoji. (One example from Kent C Dodds — which, fun fact, made it into the proposal). At the time I was working for a small company in Austin, and I spent too much of the day complaining to my coworkers about the missing yarn emoji. (Bless them).

I left work for the day, and headed to the parking garage to go home. The building had a coffee shop on the bottom floor, and I found myself sitting down for a just a minute to research how emoji come to be — and ended up staying until closing time banging out the initial yarn emoji proposal.

The Unicode Consortium is a non-profit that maintains Unicode — (circular, I know) — which is the universal character encoding standard. Unicode 13.0 contains 143,859 characters, including 3,304 emoji.

“The Unicode Standard provides a unique number for every character, no matter what platform, device, application or language.”. (Source)

The Unicode Consortium maintains a very detailed, specific process for proposing new emojis for consideration. (It does look like this has changed slightly, and become more detailed since I worked with it. But maybe I’m not remembering correctly.) Recommend taking a look at the submission guidelines — it’s interesting to see what kind of considerations the committee takes into account when considering a new emoji.

The more interesting question though is, who are these decisionmakers in the Unicode Consortium? You may not be surprised (or maybe not).

In 2015, friends Yiying Lu and Jennifer 8. Lee were messaging about plans to meet up and eat dumplings. Lu’s realization that the official emoji set lacked a dumpling emoji set a quest in motion. They learned that emojis are standardized through the Unicode Consortium, and the Unicode Consortium’s most powerful members, (“Full” members) are mostly ginormous US-based tech companies (Adobe, Apple, Facebook, Google, IBM, Microsoft, Netflix). Other full members include the German software company SAP, the Chinese telecom company Huawei, and the goverment of Oman.

They formed a grassroots organization, Emojination, dedicated to making “emoji approval an inclusive, representative process”. They launched a Kickstarter (”Where is the dumpling emoji?”) with the goal of raising enough money to buy Emojination an annual membership to the Unicode Consortium at the “Associate Member” level that would give them half a vote on the commitee that oversees emoji. (Note: It would appear that the “Associate” level no longer has the privilege of half a vote.)

The Kickstarter raised $12,478, and the dumpling emoji was released as part of Unicode 10.0.

It started with a dumpling, but it doesn’t end there. Emojination is an active group that aims to support others in proposing new emoji; Others like my co-author Amanda and myself!

I had no idea what I was doing. I stood up a very quick website (yarnemoji.com, RIP) because I thought it would help somehow? Turns out it did! After my initial burst of energy, the draft proposal languished; Then one day I got a random outreach via the website (on which I had inexplicably but serendipitously included a contact form — perhaps part of the WordPress template). 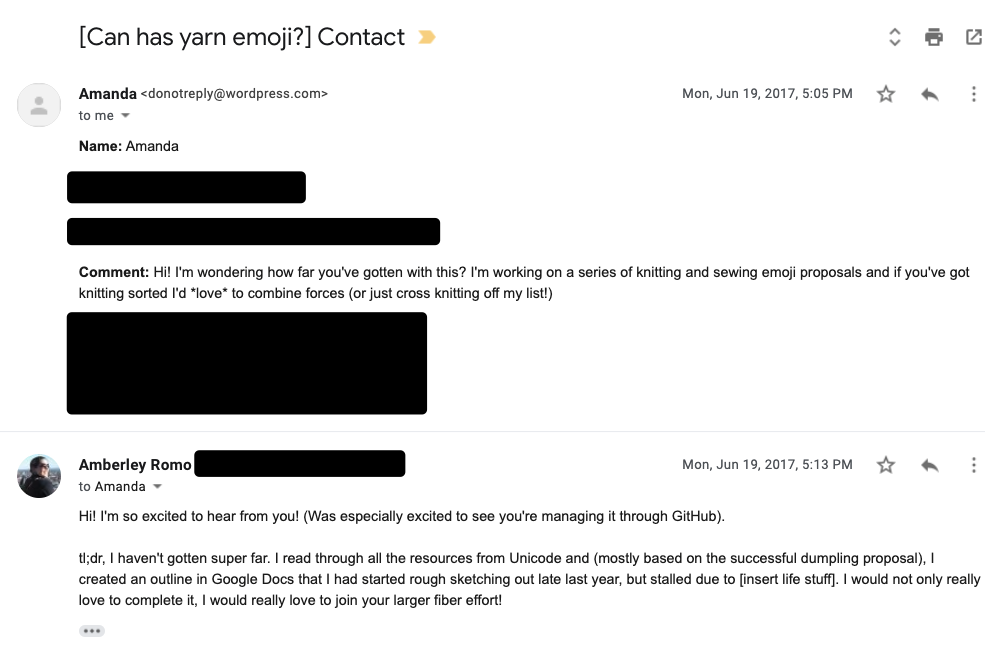 Amanda was thinking beyond yarn — she recognized that the current emoji set (at the time) included glyphs for a number of tools (🔨, 🔧, 🔩), but there were no glyphs for “the making, mending, or maintenance of textiles” (to quote our proposal). Additionally, the existing tool emoji were all strongly associated with trades traditionally dominated by men.

While I was aware of the dumpling emoji story, and the Kickstarter, I didn’t realize the extent of the activity behind Emojination. It was through Amanda that I became aware of that (she was already connected with and working with them). Emojination connected us with a designer to create proposed images to include on the proposal. Others jumped in to help with copy edits and feedback. Jenny (of Emojination) suggested that it would be compelling to submit a proposal for a slate of fiber arts emoji. Ultimately, on July 28, 2017, we submitted an official craft emoji proposal containing four separate emoji proposals — needle and thread (Amanda’s primary driver), spool of thread, ball of yarn (my primary driver), and safety pin. And suddenly, there it was in the official register.

Thread, yarn and safety pin were all accepted, and released as part of Unicode 11.0 in 2018. Needle and thread was not initially accepted — the committee thought that it was adequately represented by the spool of thread, and therefore redundant, and also not visually distinctive. Amanda kept at it, and it was ultimately approved as sewing needle for release in Unicode 13.0 in 2020.

There’s a sort of extremely unsubtle poetry in this scenario. Who gets to decide language? It affects the words and symbols we use to communicate every day, but it’s a force that is so deeply part of the fabric of our lives (no pun intended) that not many people have occasion to think critically about it, I think.

So in my stitch and bitch group, whenever we bemoaned the lack of a yarn emoji, there was no logical leap to “I could effect that change”, because it didn’t occur to me that it was changeable, or that if it was I could do anything about it — it was just the way it was. So it remains a small but impactful lesson for me, beyond Unicode and emoji.

So yeah. Every time y’all use a 🧵 emoji for your Twitter threads? I smile.

Anyway, that’s the story! If there’s an emoji you’ve always thought should exist (or you’re just curious) go check out Emojination. And speaking of language as part of the fabric of our lives, go check out the Self-Defined project, too.