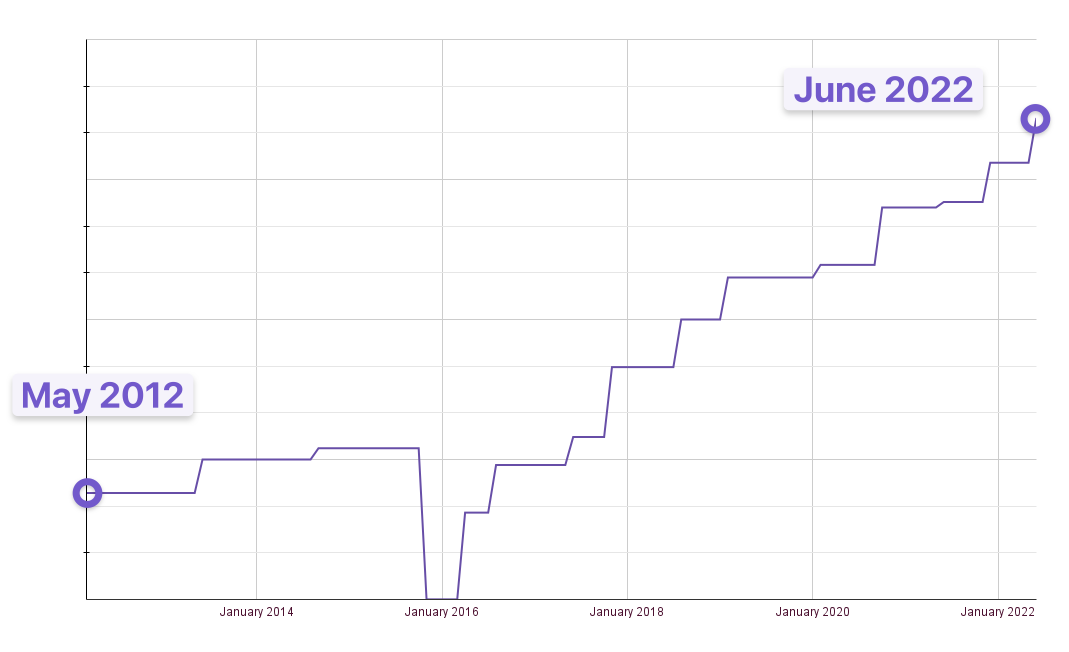 I’ve been promoted to Staff Frontend Engineer at Netlify! It’s gratifying, validating, and hard-won. Hitting this milestone has prompted me to take some time to reflect on my career so far. I somehow didn’t notice until now that I graduated from college ten years ago June.

In a recent conversation, I realized that I hadn’t really stopped and taken stock of my compensation trajectory. So I put together a quick chart just to see what it looked like. I mentioned this in a discussion shortly afterward, and asked if they thought that would be potentially interesting to share, and they said yes. So, hopefully at least one person gets something out of me writing this down. There’s a lot more to reflect on about my career than compensation of course. That would be a much longer post. This little write-up will be be specifically about comp — the comp trajectory of a bootcamp grad, sample size of one.

I feel beyond lucky to have started my career the way that I did. My sophomore year of college, I began seeking my first internship. Instead of sifting through postings, I decided to do cold outreach to non-profits in an area I was passionate about. I reached out to several orgs that specifically were dedicated to working with people with intellectual and developmental disabilities (I/DD). The org that responded was the headquarters of The Arc, a national organization with hundreds of state and local chapters across the country. They didn’t have an internship program, but they said they’d meet with me. I had pivoted my journalism degree to a public communications degree, so I got connected with the Director of Communications. I was a PR & Communications intern, then Marketing & Graphic Design intern.

When I was a junior in college, The Arc began rolling out a national rebranding campaign to cohere the visual identity of the org. They hired me part time to execute the rollout to affilate chapters across the country. When I graduated, I went full-time. Throughout that time, I became great friends with person who did all things web — Dave Kennedy, and he taught me a lot, and encouraged me to pursue webdev. I had been building on the web for fun for a long time, starting from Myspace era tinkerings and static HTML/CSS sites. When he left and another web role opened up, he recommended I apply, and I got the role. And that’s how I got paid to build websites for the first time.

It was a great first step, but in that role I didn’t have anyone to learn from, any way to grow past what I was already capable of. I’m extremely proud of the work I did, but I wanted to work with people I could learn from, and grow as a dev. I started applying for dev roles. I hit a wall because my strongest experience was essentially in branding and client services, and the companies I connected with redirected me to other roles along those lines. That’s how I became a technical project manager for an agency. I learned a lot in that experience, good and bad. But the biggest thing I learned was that I needed more technical experience to do that job the way I really wanted to, and I still wanted to have professional engineering experience under my belt.

A person I had gone to college with had done one of the early bootcamps (Dev Bootcamp) and had success afterward. And one of the only female engineers I worked with there, Maggie Epps, had also done a career pivot via a bootcamp. Owing in large part to her support and encouragement, in the fall of 2015 I decided to quit my job, move to back to Texas (Austin), and attend Makersquare. 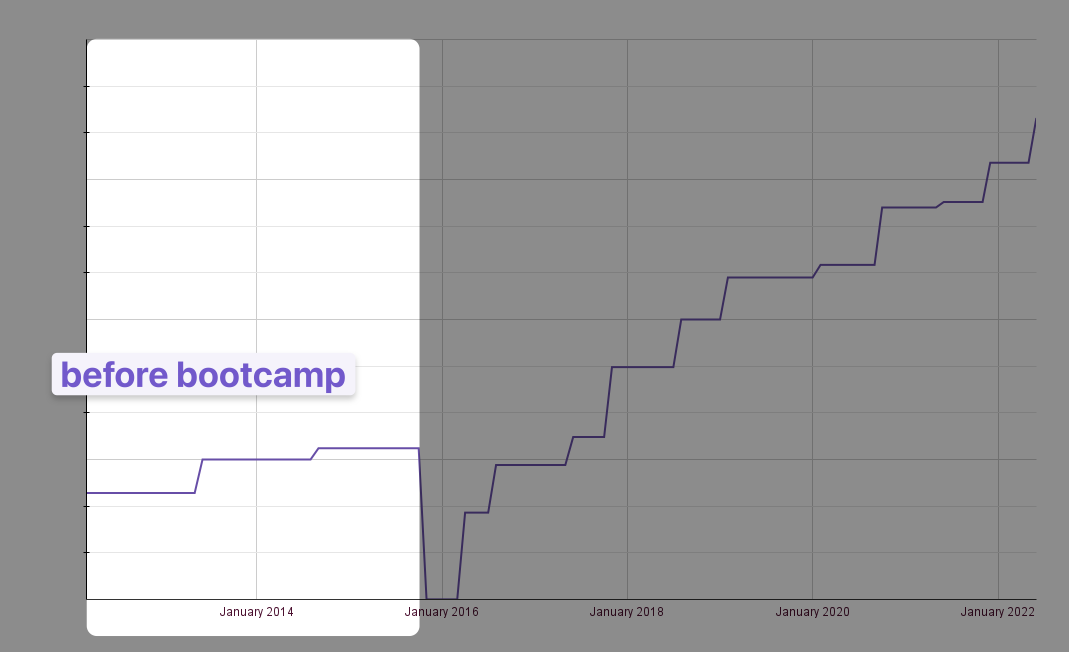 During the bootcamp I was bringing in nothing and living on savings. Afterward, I decided to apply to stay on for a three month teaching assistantship to bring in a little money while I decompressed, synthesized the info dump of the prior three months, and prepared to job search. 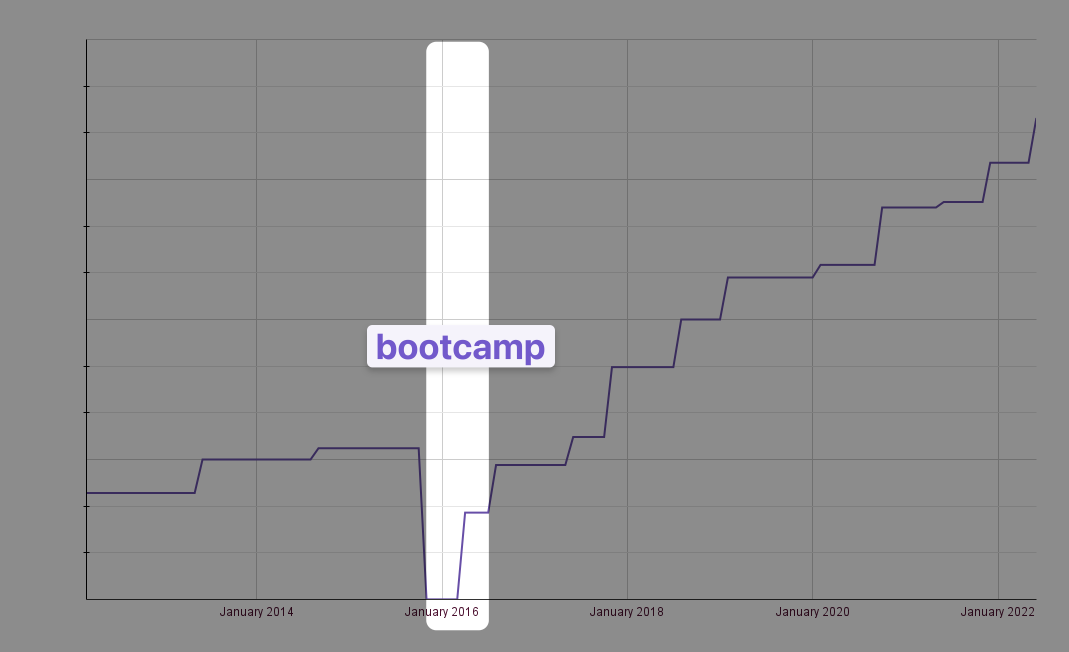 I did the bootcamp because I was serious about making the pivot, but also as a calculated investment for compensation growth. For my first role after the bootcamp though, I settled for a slight paycut.

Funny enough, the job I got ended up being the very first posting I responded to. The pay was on the lower end compared to other bootcamp grads in my cohort, but it had exactly what I was looking for. The company was small, and the frontend crew led by Wes Todd was specifically hiring two early career software engineers to grow and mentor.

After completing the bootcamp my compensation has changed at a faster rate. These changes have for the most part, however, not been tied to promotions. 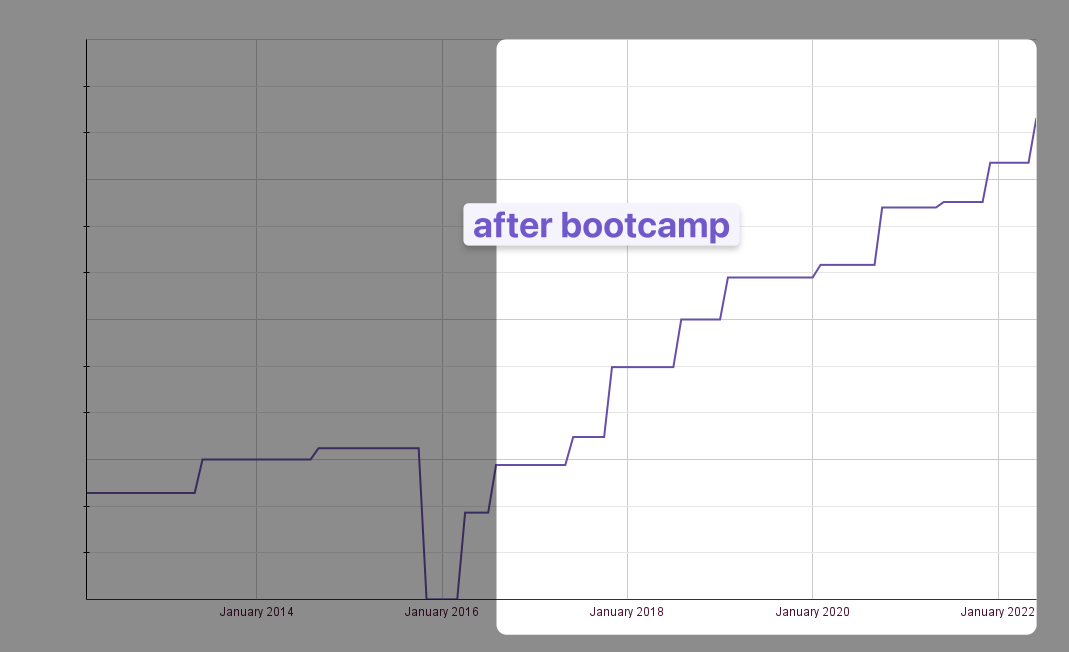 In hindsight, my post-bootcamp career in tech appears to be more linear than it felt while I was living it. From before the bootcamp to now, my income has increased by 🥁… nearly 220%.